React hooks allow us to create much cleaner code than when using class components (up to 90% cleaner).

We’ll explore the useState hook today by comparing two versions of the same counter component. One of them is written using the class syntax and the other using hooks. 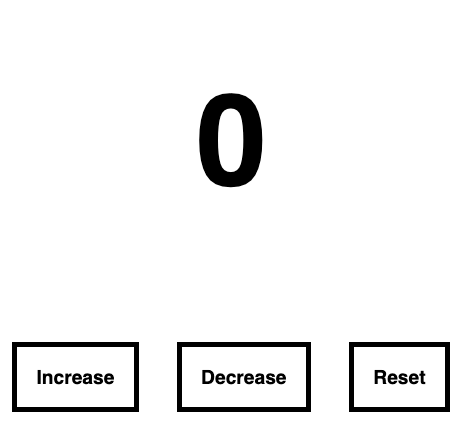 Here’s what the class based counter’s code looks like:

The useState method takes in an initial state value and returns an array where the first element is a reference to the state and the second element is a function to change the state.

Note that we’re destructuring the array to make the code cleaner. It’s the same as the following:

Let’s see whether the asynchronous behavior of state change is affected by hooks.

We want to increase our counter by 2 instead of 1 now. Let’s add another this.setState statement to our increase method.

But our counter still only increases by 1 because setState is asynchronous. Since setState uses Object.assign to assign the state updates it ends up doing this:

The last object with a matching key passed to Object.assign is used to update the original object’s value.

Let’s try passing a function to setState instead:

And now our counter increases by 2.

Now we want to do the same using useState. We’ll call setCount a second time inside our increase method.

And the counter only increases by 1. So this works the same way as when we passed an object to setState in a class component.

Fortunately, the setCount function can also has a different form.

This works now and our counter increases by 2.

There are some differences in the behavior of setState and the setter function returned by useState (the setCount function in our example).

The setState method passes in the props as the second argument to the callback function passed to it.

Let’s try to limit our counter’s decrease method so it doesn’t go below 0.

Here’s what the method would look in the class component.

Notice that on line 3 we’re not returning anything. The state still updates since React merges the old state with whatever is returned.

What happens when we do something similar in our functional component?

When the counter is at 0 and we try to decrease it, the number disappears.

The new state is set to undefined since whatever we return in callback function passed to setCount is set as the new state. And if we try to increase the counter we’ll get a NaN.

Instead, you need to return the entire new state because new values aren’t automatically merged as in setState.

And now it works as expected.

If you use an object with multiple values in useState, a new object needs to be passed in that contains the old key-value pairs along with the new key-value pair(s).

What's on this Page